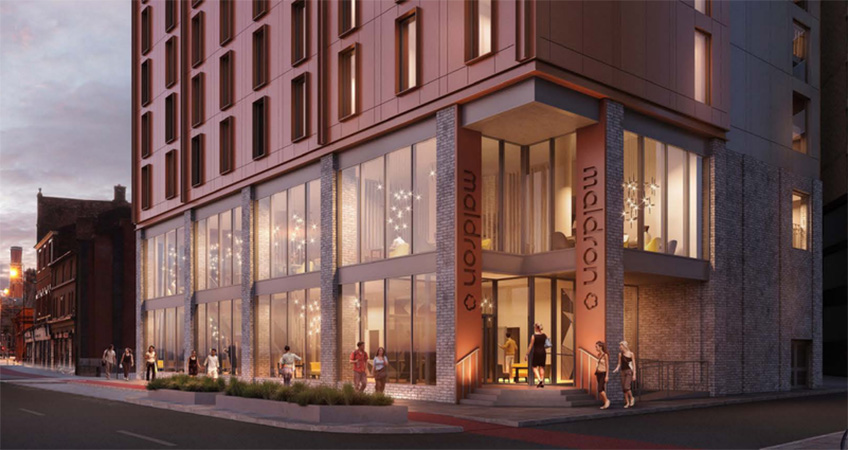 The 188-bedroom hotel would contain a coffee lounge, bar, and restaurant open to the public.
19 November 2020, Salford, United Kingdom

Plans for a new hotel in a 16-story tower have been revealed.

The 4-star Maldron hotel could be built in a car park on Chapel Street.

The site in Salford, which neighbors the Citysuites Aparthotel building, was once occupied by the Kings Head pub, but cleared in the mid-20th century.

The 188-bedroom hotel would contain a coffee lounge connected to a first floor bar and restaurant which would be open to members of the public.

A gym would be located on the second floor for use by hotel guests only.

The reception area would also feature business facilities for guests to work.

Dalata Hotel Group, which owns the Maldron brand, has agreed to a 35-year lease for the 16-story structure, following in the footsteps of the new Charles Street hotel in central Manchester which is due to be completed in 2021.

Central and Urban, the company behind the project, held a public consultation online in August 2020 about plans for a 15-story building with 186 bedrooms.

A statement prepared by global architectural practice NORR Consultants explains why this site in Salford was selected for the new hotel project.

It said: "With the success of the Charles Street development, Dalata asked the Central and Urban team to assess locations in the Manchester area for a further Maldron hotel.

"The team looked at various options, one of which was the proposed development site.

"The site was considered a good option due to the wider regeneration of the area and the high-quality neighboring development, its proximity to Victoria Station, Salford Central Station, and the significant leisure offering in the local area.

"Having considered a number of sites, the proposed development site was selected as the preferred option."

The project promises to offer a high-quality, 4-star, full service business hotel to enhance the quality and variety of hotel rooms in the city centre and build upon the economic and architectural regeneration of the Greengate area.

The development would also create 150 construction jobs over two years as well as 50 permanent jobs at the hotel, according to the planning application.

Salford City Council is due to make a decision on the plans by early January 2021.