A 22-Story Aparthotel Could Be Built in Manchester 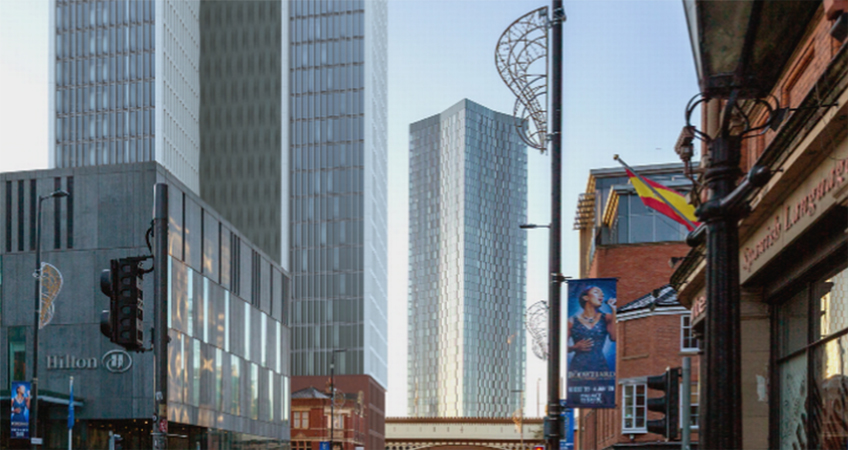 An artist's impression of the hotel's reception area and ground floor, with the Castlefield Viaduct on the right. (Image: Ask Real Estate/SimpsonHaugh).
29 June 2020 Manchester, United Kingdom

Plans for a towering ‘aparthotel’ near the Castlefield Viaduct have been recommended for approval by Manchester council’s chief executive.

Development decisions are still being handled by Joanne Roney during the coronavirus pandemic as the planning committee has yet to be reinstated by the town hall.

Ask Real Estate’s proposals for a 22-story Staycity hotel between the Grade II listed viaduct and the Deansgate Tavern are the latest to be considered by the council chief.

If approved it would have 279 rooms, a reception and coffee shop on the ground floor, as well as an exercise room for guests.

It would be the fourth Staycity hotel in Manchester, with the chain already operating on St Peter’s Square, Mason Street and near Piccadilly station.

Part of the proposed building would hang over the viaduct, while some of the railway arches would be repurposed to provide extra commercial spaces.

The building currently occupying the site will be demolished to make way for the hotel and a new pedestrianized open space on Deansgate and Trafford Street.

Ask Real Estate says retaining Deansgate Tavern was a priority, and the building will wrap around the pub so it retains its prominence on street level.

The retention of the pub was ‘crucial’ to Castlefield Forum lending its support to the scheme, with the conservation group also welcoming the opening up the arches.

But the scheme has received several objections from residents, with one lamenting the loss of the green wall currently facing onto the Deansgate-Castlefield Metrolink stop.

Another said: “The architecture should be in line with the pub and be low rise, this proposal is overdevelopment and does not complement the surrounding area.”

In their submission to Ms Roney, Manchester council planning officers say the scheme should go ahead as it would meet ‘growing demand’ for hotel rooms in the city.

“Tourism is a critical part of the city’s economy generating around £4.5 billion (US$5.5 billion) a year and supporting 50,000 jobs,” says the report.

“Hotel occupancy has remained between 75 percent and 78 percent despite 3,000 bedspaces being built in the city centwe since 2014, demonstrating the continued strength of the market.

A decision on the planning application is due to be made this week.