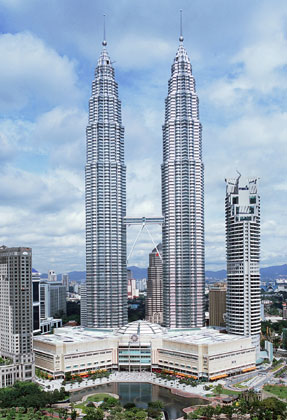 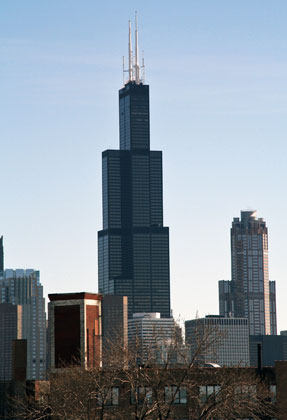 It was the successful challenge by Petronas Towers (Malaysia) for “the world’s tallest building” title that opened a floodgate of media approaches to the Council in 1996. Newspapers, magazines, television, radio, producers of programs—all called.

During the previous year we had planned that our April Executive Committee meeting would be held in Chicago since it would coincide with a Congress of one of our Sponsoring Societies. As soon as that word got out, the call came even more frequently. “ Yes, it’s been an item on our agenda for a year.” CNN and NBC’s “Today Show” arranged to interview me atop the Sears Tower in the days before the Executive meeting. It was the culmination of weeks of “media awareness” of the competition between Sears and Petronas. In the days leading up to the Executive Committee meeting, Council headquarters received at least 75 phone calls from television, radio, newspaper, and magazine journalists requesting information and interviews. Even “Spiderman” —the skyscraper climbing daredevil—wanted a list of the 100 tallest buildings so he could climb them all, having already put Sears, World Trade Center, and Empire State under his belt.

Jay Leno joked on the Tonight Show with a line that all the Council did was once every ten years to look up in the sky and say, “Yep, that’s the tallest!”

We held our Executive meeting—as scheduled and without the press in attendance. Blair Kamin, architecture critic for the Chicago Tribune, had been in touch with me earlier and I had mentioned to him that our meeting would finish about 4:00pm and that he could stop by if he wished.

Four o’clock came, we opened the door and there was Blair—together with a host of others. Somehow the word had spread, and there was nothing for us to do but hold an impromptu press conference. There must have been a dozen TV cameras. Radio, news magazine, press, and news-service reporters came in to standing room only.

It was an “active” session, to say the least, with a number of reporters as emotionally involved as were the citizens of Chicago —with some strong reactions when they learned that the Council had simply re-affirmed a 60-year-old standard for measuring the height of tall building (from sidewalk at the main entrance to the structural top). “But why don’t the TV antennas count?” “Because flag poles, radio masts, and TV antennas have never been counted. And if they had been, Sears would not have held the record for 23 years because the antenna of New York’s World Trade Center is higher (527m, 1728ft) than those of Sears (520m, 1707ft).”

Actually, on the plane en route to Chicago I’d been wondering what I could say that might be a palliative. And there were several Sears statistics that might be of help in that direction:

When I was pointing out these features at the Executive meeting, Les Robertson suggested, “Why not establish three additional height categories in addition to structural or architectural top? These could be highest occupied floor, highest roof, and tip of any broadcast antenna.” This was agreed to and is now the Council’s standard.

Shortly after those first calls started coming in at the time of the “Sears/Petronas saga”, I received letters from elementary school students in the Chicago area. One was written to Blair Kamin which he forwarded to me. It was written by Brett Wolff, a third grader in Eastville School. He said, in part, “…you just can’t take the title of ‘world’s tallest building’ away from the Sears Tower and give it to the Petronas Twin Towers. It will upset the whole country…Please count the Sears Tower antennae and give the title back to Sears Tower…not just for me, my class, Mrs. Elko, but for the rest of the country, including Chicago and the Sears Tower.”

Another letter was from Mrs. Meade’s third-grade class of the Moore School in Hinsdale, Illinois. Under the leadership of their Arts Awareness Coordinator, Linda McElherne, they had “studied” the Sears Tower and the Petronas Tower drawings and concluded their deliberations with a vote. Quoting from their letter (which even included the ballot they’d used—complete with careful drawings). “The vote came back with 16 favor of the flat-topped (Sears Tower) and 2 for the ornamental-topped (Petronas Towers).” It was signed by all 18 students.

After the Chicago Executive meeting was over, I had a morning to spare before my flight home to Bethlehem, so I visited Mrs. Meade’s class. I talked with the students about the Sears/Petronas issue, of skyscrapers, of engineering, and of civic pride. Duly impressed by their thoughtful discussion, I left the classroom that morning confident of our society’s future if it’s going to be in the hands of such as these. The children had given me much to think about, along with a number of wonderful letters and stories (one of which—by Jennifer Schwarzkopf—we featured as “page one” of our next newsletter). It was the culmination of a once-in-a-lifetime week in Chicago: Nationwide television. Front page headlines. Impassioned debates. Civic pride. Tradition. Innovation. And it was all topped off by the gatherings of friends and colleagues from around the world.

As Jennifer pointed out at the end of her “Tommy the Tower”, being the tallest may not be the most important thing after all. And this gets to the mission of the Council itself: to bring professionals together and to see that the latest knowledge from research laboratories and advanced design practice is collected and disseminated in such a way as to be useful to practitioners—who will create even better buildings to serve society.

Lynn Beedle was just doing his job when he announced the world’s tallest building. But the third graders demanded an explanation.

Alison, Leif, Griffin, Brook, Dane, Michael, Carolyn, David, Lisa, Jamie, Elizabeth, Scott, Sean, Matt, Eric, Jennifer, Stephanie and Mara all signed the letter, respectfully addressed to “Ms. Lynn S. Beedle.” Alison, Leif, et al., third graders at the Monroe School in the Chicago suburb of Hinsdale, had a simple question for Lynn Beedle. Where did she get off telling the world that the great  city-state of Chicago was no longer the home of the world’s tallest building? 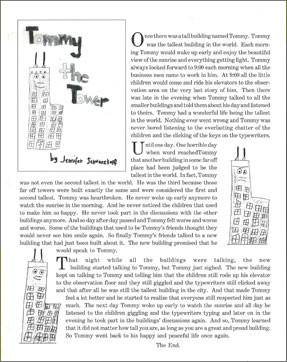 Such were the burdens of fame. Third graders a thousand miles away knew who you were, knew what you did and demanded that you explain yourself. Lynn Beedle was prepared to do just that, knowing that if nothing else, he could relieve the children of at least one misconception. Ms. Lynn Beedle is actually Mr. Lynn Beedle, or more properly, Dr. Lynn Beedle.

In April, the Council affirmed that the twin Petronas Towers, at 1,483 feet each from street to spire tips, were the tallest buildings on Planet Earth. Thus, after a 22-year run, the Sears Tower was no longer No. 1. It wasn’t even No. 2. Adding to the sting was the fact that Chicago was undercut by an upstart half a world away. Malaysia! A nation one-tenth the size of the United States. “A lot of people couldn’t tell you where it was on the map,” noted Beedle.

But Chicago wanted answers. More in keeping with Chicago tradition, it demanded a recount. “Chicago is a special city,” Beedle observed during an interview. “It always has this concern about being No. 2. But No. 3”! Some Chicagoans, Alison, Leif, et al. among them, declined to accept the council’s decision passively. They argued that it was wrong-headed. “They had some reason,” Beedle recalled in an interview, “But they didn’t hold water.”

Mead, the teacher of the Monroe 18, was moved that such a busy person in faraway Bethlehem would take time to respond to third graders in Hinsdale. “He wrote the letter in language children would understand,” she recalled. She astutely observed that Beedle had typed the letter himself, something Beedle confirmed.

Would they like him to come to Hinsdale and talk this over?, Beedle asked. Absolutely!, they replied.

Beedle was fresh from the council’s biannual executive council meeting, held in the Chicago offices of Teng & Associates. After a half-hour discussion, the 15-member council decided unanimously that it was right all along, Sears was No. 3.

It would be a wild week. Beedle would be interviewed atop the Sears Tower by NBC and CNN. He was on the BBC and National Public Radio.  Now it was the third graders’ turn. Beedle was prepared. He arrived at the two-story brick school building bearing gifts: Sears Tower pins and a Lehigh University pennant.

The children, too, were prepared. They happened to be studying skyscrapers, part of a Parent Teacher Organization program. The challenge to Chicago’s vertical superiority was fortuitous. “When that was threatened, “ Mead said, “that kind of heightened the children’s interest.” So to speak.

Beedle listened to his critics. “They spent more time voicing their opinions than asking questions,” said Mead. (Are these future journalists, or what?) The argument went something like this: If you were to place the Sears Tower and the Petronas Towers side by side, a reasonable person could well conclude that Sears was taller. Beedle responded by drawing on the blackboard.

Yes he acknowledged, to the casual observer (and the non-casual Chicagoan, particularly the latter) the Sears Tower may appear to tower over the Petronas Towers. From sidewalk to antennae tips, it stands 1,703 feet. That’s 220 feet taller than the highest point of the Petronas spires. But look closely. The spires rise well above the Sears Tower’s flat roof. The antennae don’t count. And if they did, 1 WorldTrade Center would be the tallest at 1,727 feet.

Ok, why count the spires then? The spires are architectural elements, part of the building’s “structural top,” like the spires of New York’s Chrysler Building and Philadelphia’s 1 Liberty Place and 2 Liberty Place. Under the council’s criteria, penthouses and towers count. “Towers include spires and pinnacles,” it states. “Television and radio antennae, masts and flag poles are not included.”

One of the key architects of that policy was the late Fazlur Rahman Khan, a structural engineer—He was the designer of the Sears Tower. In all, Beedle’s meeting with the third graders would last twice as long as the meeting of the council’s executive committee. “The children had a better understanding of the council’s decision,” said Mead, “but I don’t think they necessarily agreed with the decision.”

Before Beedle left, Christine Mead informed him that the children had a surprise of their own. They had written essays with their own perspectives on the great tall-building debate. On the way home on the plane, Beedle read the essays. Some of their comments made him cry. None of them made him change his mind.