The Height Committee has reached a consensus that One World Trade Center’s height to its architectural top is 1,776 feet (541.3 meters).

Note, because One World Trade Center is still unfinished and has not received its certificate of occupancy, it cannot yet enter CTBUH rankings as a “completed building,” but its height is no longer in dispute.

There were two central issues for discussion in the ratification of this building’s height against CTBUH criteria.

This determination was made through examination of design and construction drawings, and continued through dialogue among the Height Committee’s 25 members. The committee received a 15-minute presentation by the One World Trade Center owner/design team, including the project’s chief architect, David Childs of Skidmore, Owings & Merrill LLC (SOM) and Ken Lewis, project director at SOM.

“We were very satisfied with the detailed information presented by the team, in particular, that which affirmed that the structure on top of the building is meant as a permanent architectural feature, not a piece of functional-technical equipment,” said Timothy Johnson, Chairman of CTBUH and Design Partner at NBBJ.

“The design of One World Trade Center, as explained to us, reinforces its role as a symbol of resurgence on this important site,” said CTBUH Executive Director Antony Wood. “In particular, the spire which holds the beacon light, shining out at the symbolic height of 1,776 feet, is especially poignant – echoing the similarly symbolic beacon atop the Statue of Liberty across the water.”

The Council measures the height of buildings in three categories:

1. Height to Architectural Top
Height is measured from the level1 of the lowest, significant,2 open-air,3 pedestrian4 entrance to the architectural top of the building, including spires, but not including antennae, signage, flag poles or other functional-technical equipment.5 This measurement is the most widely utilized and is employed to define the Council on Tall Buildings and Urban Habitat rankings of the "World's Tallest Buildings."

2. Highest Occupied Floor
Height is measured from the level1 of the lowest, significant,2 open-air,3 pedestrian4 entrance to the finished floor level of the highest occupied6 floor within the building.

3. Height to Tip
Height is measured from the level1 of the lowest, significant,2 open-air,3 pedestrian4 entrance to the highest point of the building, irrespective of material or function of the highest element (i.e., including antennae, flagpoles, signage and other functional-technical equipment). 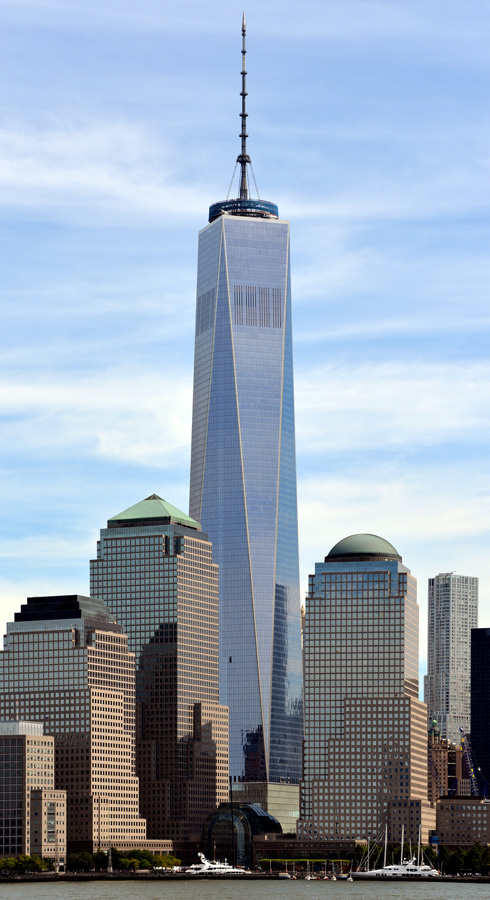 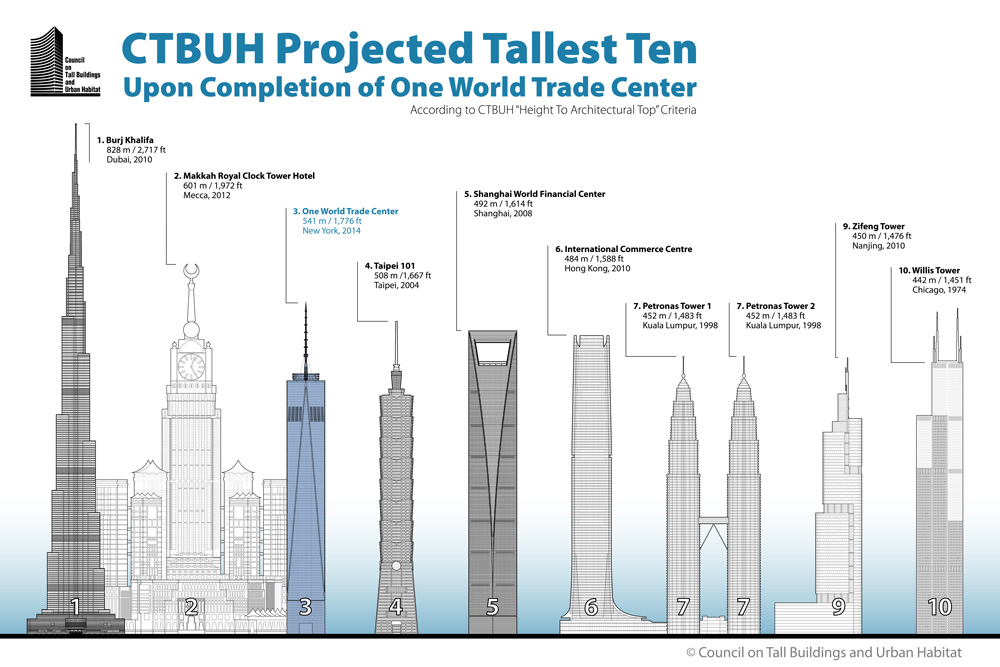 CTBUH Diagram showing where One World Trade Center will rank among the tallest buildings in the world once the building completes in 2014.

“We feel this exercise validates our criteria, and we are grateful to the One World Trade Center team for taking the criteria seriously, engaging with the process, and traveling to present their project to us,” said Peter Weismantle, Chair of the CTBUH Height Committee and Director of Supertall Building Technology for Adrian Smith + Gordon Gill Architecture. “There will always be, from time to time, projects that challenge these criteria. It is just as important to take the opportunity presented by those challenges to re-evaluate the criteria themselves as it is to ratify the height of an individual building.”

The design height of the One World Trade Center was set at 1,776 feet to commemorate the year of the Declaration of Independence of the United States from Great Britain, and to reaffirm the principles behind the nation’s founding in the face of attacks that destroyed the original World Trade Center towers on Sept. 11, 2001. 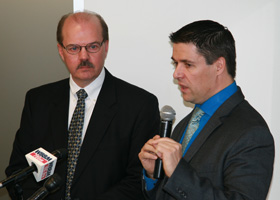 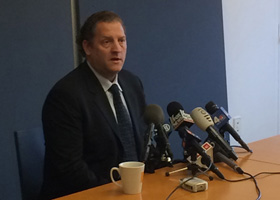 Due to design changes that resulted in the removal of the architectural cladding around the mast at the top of the structure, it became unclear whether the structure was in fact a “spire” – a vertical element that completes the architectural expression of the building and is intended as permanent, or whether it was an antenna – a piece of functional-technical equipment that was subject to change.

The spire-antenna distinction makes a difference in the measurement of “height to architectural top,” which includes spires but does not include antennae, signage, flag poles or other functional-technical equipment. Determining the topmost structure to be “functional-technical” potentially could have significantly impacted One World Trade Center’s ranking against other buildings, as the next obvious point to take a measurement of “architectural top” would have been the building’s roof slab, at 1,334 feet, 8 inches – 441 feet, 4 inches lower than claimed.

The media prepares before the press conference.

The One World Trade Center team presented a detailed explanation of the design intent of the project. Mr. Childs explained that the beacon at the top of the mast is comprised of a group of light emitting diodes (LEDs) embedded in acrylic cylinders. Two reflectors revolve about the lights on a vertical axis, projecting the beams outwards as horizontal lines, reminiscent of a lighthouse. The height of the mast is also symbolically significant, in that it increases the total observable height of the building from the top of its steel parapet at 1,368 feet, the height of the original World Trade Center Tower 1.

There is a required red FAA warning light located on top of the beacon, which itself is topped by a 16-foot lightning rod. Based on Mr. Childs’ explanation, the CTBUH Height Committee was satisfied that these elements could be considered “functional-technical equipment,” and thus did not factor in the “height to architectural top” calculation.

David Childs of Skidmore, Owings and Merrill, One World Trade Center’s architect, explains the design vision to the CTBUH Height Committee on November 8, 2013.

The second issue at 1WTC was the location from which the 1,776-foot measurement had been taken. The building has four entrances, one on each side. Three of those entrances are flush with the 9/11 Memorial Plaza, which is level with the base of the original World Trade Center towers. These three entrances lead directly into the elevator lobby, while a fourth entrance is 5 feet, 8 inches lower than the lobby, on Vesey Street, due to the change in grade from south to north. If measured from this point, the height to architectural top would have been 1,781 feet, 8 inches.

Mr. Childs showed plans indicating that the main entrance of the building was the south entrance facing the 9/11 Memorial plaza, and that the north entrance at the lower elevation does not provide direct access to the elevators, but requires negotiating steps or using a disabled-access lift to ascend to the lobby. To be considered “significant,” an entrance must “be predominantly above existing or pre-existing grade and permit access to one or more primary uses in the building via elevators.” Therefore, the lower Vesey Street (north) entrance was not considered “significant” by the committee.

“I feel completely satisfied that this building achieved what it set out to do,” Mr. Childs said. “Beginning in 2005, we used the Council’s rules and designed around them. It’s an important statement for all of us to make.”

When completed and occupied, expected to be in early 2014, 1WTC will surpass The Willis (formerly Sears) Tower in Chicago as the Tallest Building in North America. At 1,776 feet / 541 meters, 1WTC will likely be the third-tallest building in the world upon completion, after the Burj Khalifa in Dubai (2,717 feet / 828 meters) and the Makkah Royal Clock Tower in Mecca, Saudi Arabia (1,972 feet / 601 meters).

Footnotes:
1 Level: finished floor level at threshold of the lowest entrance door.
2 Significant:  the entrance should be predominantly above existing or pre-existing grade and permit access to one or more primary uses in the building via elevators, as opposed to ground floor retail or other uses which solely relate/connect to the immediately adjacent external environment. Thus entrances via below-grade sunken plazas or similar are not generally recognized. Also note that access to car park and/or ancillary/support areas are not considered significant entrances.
3 Open-air: the entrance must be located directly off of an external space at that level that is open to air.
4 Pedestrian: refers to common building users or occupants and is intended to exclude service, ancillary, or similar areas.
5 Functional-technical equipment: this is intended to recognize that functional-technical equipment is subject to removal/addition/change as per prevalent technologies, as is often seen in tall buildings (e.g., antennae, signage, wind turbines, etc. are periodically added, shortened, lengthened, removed and/or replaced).
6 Highest occupied floor: this is intended to recognize conditioned space which is designed to be safely and legally occupied by residents, workers or other building users on a consistent basis. It does not include service or mechanical areas which experience occasional maintenance access, etc.