CTBUH Board of Trustees Travels to Hawaii

From Thursday 22 March to Saturday 24 March, CTBUH Trustees from Chicago, New York, London, Mumbai, and Hong Kong gathered to attend the biannual Trustees meeting, which this year took place in Honolulu, Hawaii, in support of the formation of the new CTBUH Hawaii Chapter.

CTBUH Trustees started off by attending a breakfast event hosted by the National Association of Industrial and Office Properties (NAIOP) at the Pacific Club in Honolulu. There was a full house, with 100 attendees. At the event, CTBUH Chairman and Treasurer Steve Watts, Partner, alinea Consulting, presented his work on tall buildings, including The Shard and 22 Bishopsgate in London. Through his presentation, Watts showed the audience that buildings represent something much more than just a structure – they can redefine history, heritage, and culture.

From the breakfast event, Trustees went on to partake of two building site tours in Ward Village. The tours were led by Doug Johnstone, Director of Development, The Howard Hughes Corporation, who was tasked with managing development of Ward Village, a the 60-acre (24-hectare) community between downtown Honolulu and Waikiki.

Trustees toured Anaha and AE’O. Anaha is a residential building completed in 2017, and includes 244 tower residences and penthouses, and 73 townhomes and flats. The name “Anaha” means “reflection of light” in Hawaiian.

Trustees also toured AE’O, a currently-under-construction mixed-use tower that is set to be completed later in 2018. The building was named after the native “Hawaiian Still Bird”, or “AE’O”. This naming represents the developer’s commitment to the importance of incorporating natural landscape and history into Ward Village, and to creating buildings that respond to and draw from their natural contexts.

The opening presentation came from CTBUH Vice Chairman David Malott, CEO and Creative Director, AI. Malott presented an architectural case study on “High-Rise Housing: New Models for Vertical Living.” The presentation included information on two residential projects in Singapore:  The [email protected] and The Interlace. The [email protected] is a 50-story affordable housing project, whereas the Interlace is a luxury residential complex. But both offered appealing prototypes for future development in Honolulu, which shares a similarly warm and wet climate with Singapore – as well as severe space constraints and high living costs.

The next presentation was a structural case study from CTBUH Trustee Dennis Poon, Vice Chairman, Thornton Tomasetti. Poon’s presentation was on the topic “Meeting the Challenges of Design and Construction in Dense Urban Cores,” and focused on the Hudson Yards project in New York. This project consists of high-end office and residential towers, public areas, retail and cultural centers, and an iconic sculpture tower structure called the Vessel. Most of these structures are above existing train tracks and yards. This project is a good example of how to fit various towers into a dense area, Poon testified.

These presentations were followed by a Q&A Session, moderated by CTBUH Chairman/Treasurer Steve Watts, Partner, alinea Consulting, and a short coffee break.

The last presentation, "What's More Sustainable: High-Rise or Low-Rise Living?" was given by CTBUH Executive Director Antony Wood, who explored the results of the CTBUH Research Project “A Study of the Sustainability Implications of Differing Urban + Suburban Locations in Chicago.” The project undertook a groundbreaking, quantitatively investigation that compared the sustainability of people’s lifestyles in both urban and suburban areas, from both the environmental and social perspectives, using detailed information directly collected from households and best available data from public resources. The results of the study were later published in the CTBUH Research Report Downtown High-Rise vs. Suburban Low-Rise Living: A Pilot Study on Urban Sustainability.

The panel discussed the issue that many current developments in Honolulu are being built as luxury vacation homes. This is leaving much of the local population without any affordable housing options. The panel sought to address these issues, and discussed solutions to housing shortage. One solution that has been deployed in Mumbai, called “reserve housing”, provides affordable housing options for local populations displaced by luxury developments. One potential solution that came out of the panel was a resolution to push for height limit increases to help with the urban housing shortage.

On Friday 23 March, CTBUH Trustees gathered for the biannual board meeting. Agenda items included financial reporting for 2017, the 2018 budget, staffing and membership analysis, as well as an update of individual Trustees’ activities.

Saturday 24 March was reserved as a day for Trustees and families to tour Oahu island and relax. On the tour, they visited points of interest including Diamond Head, Byodo-In Temple, North Shore Surfing Beaches and the Dole Plantation.

The next Board of Trustees meeting is scheduled to take place in Dubai on the first day of the 2018 Conference, Saturday 20 October. 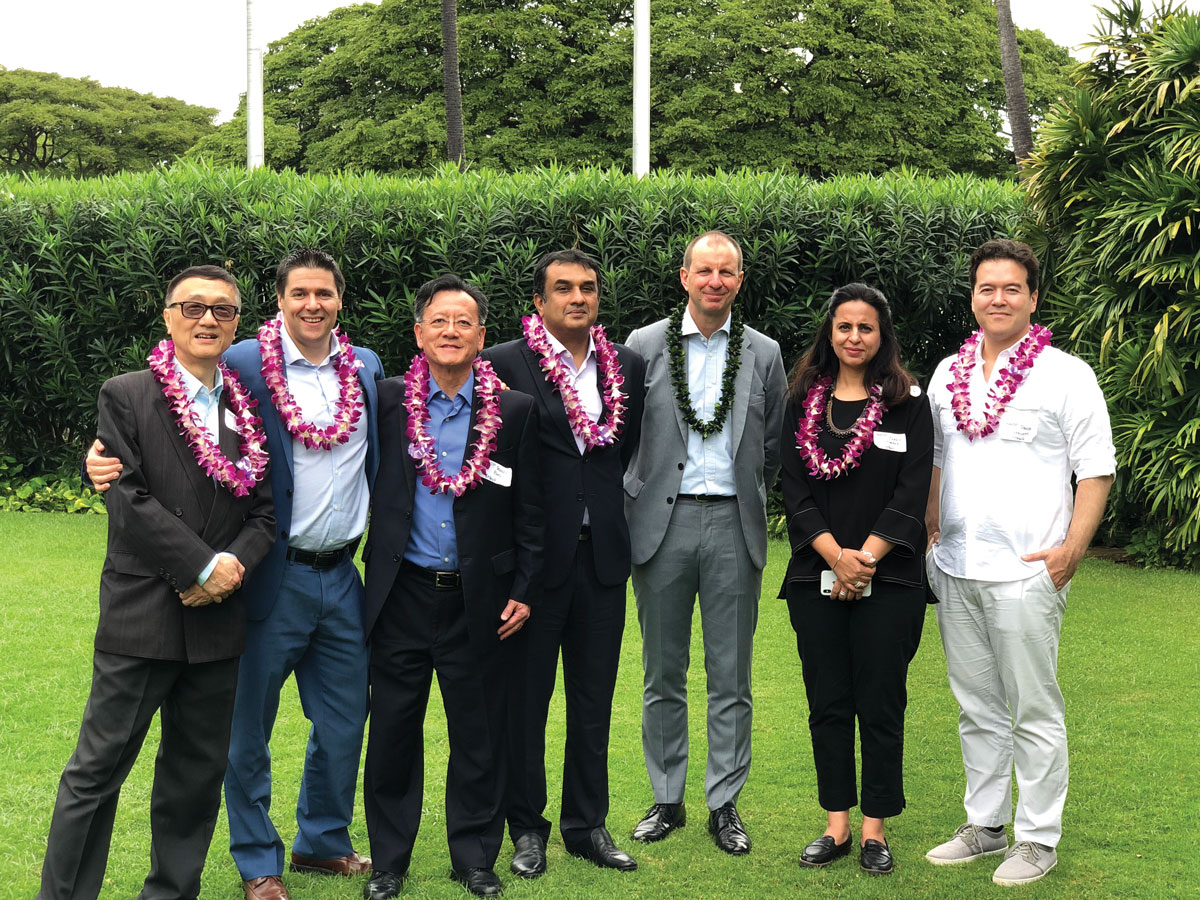 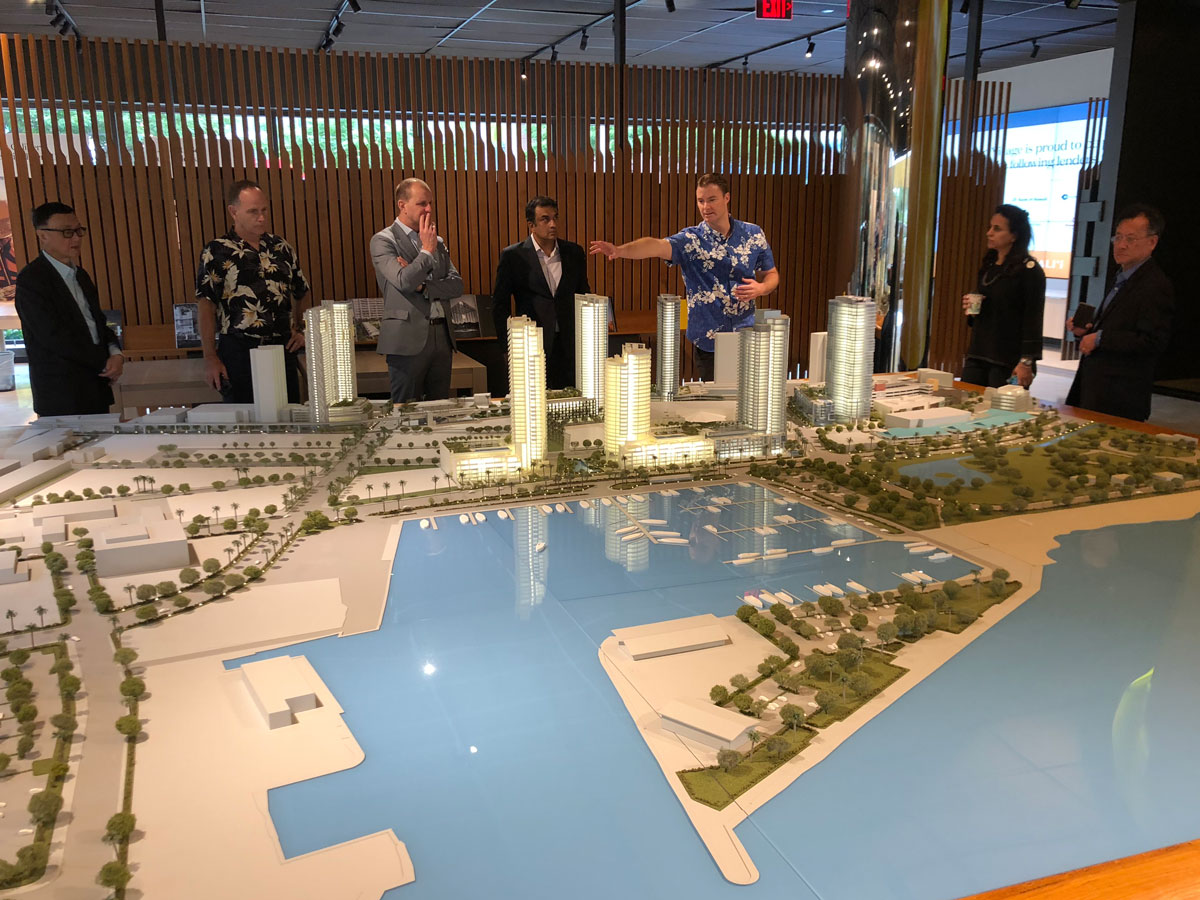 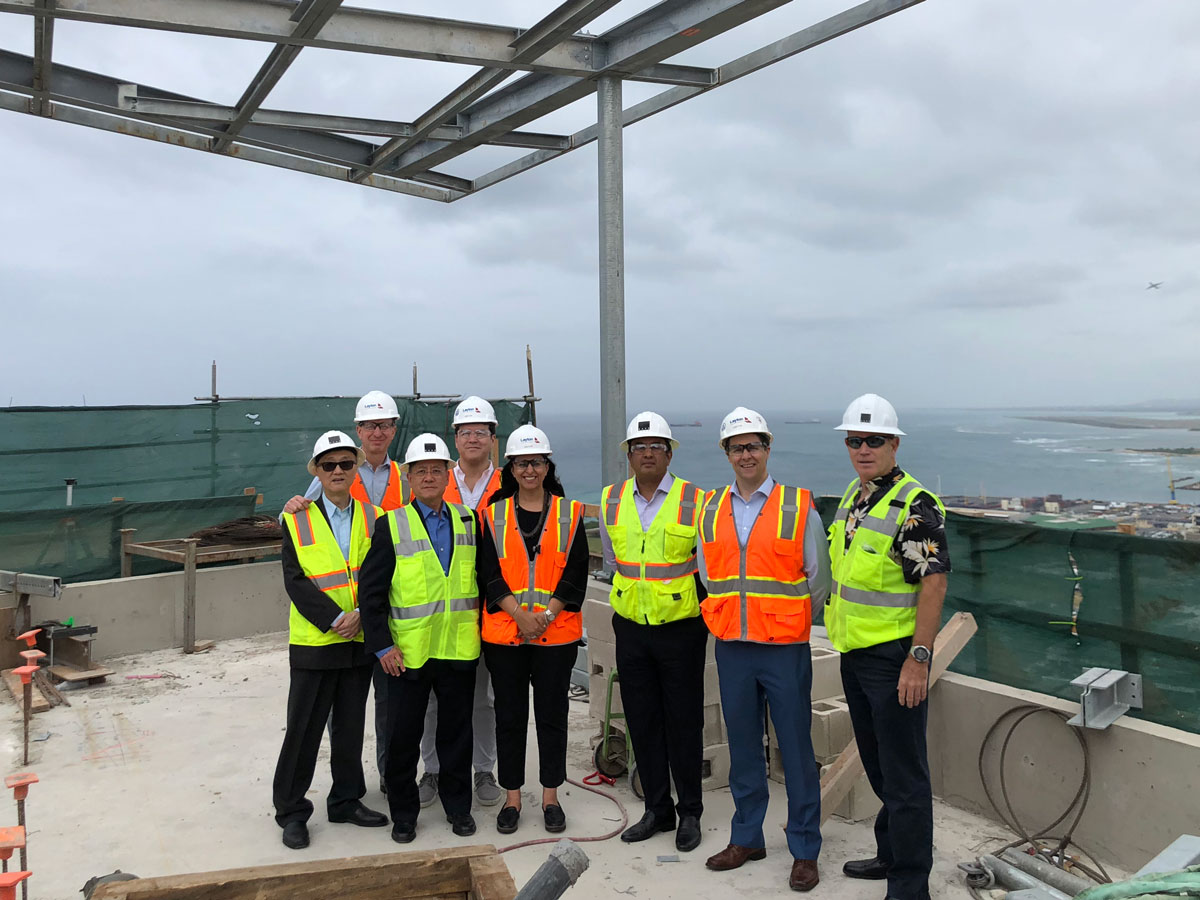 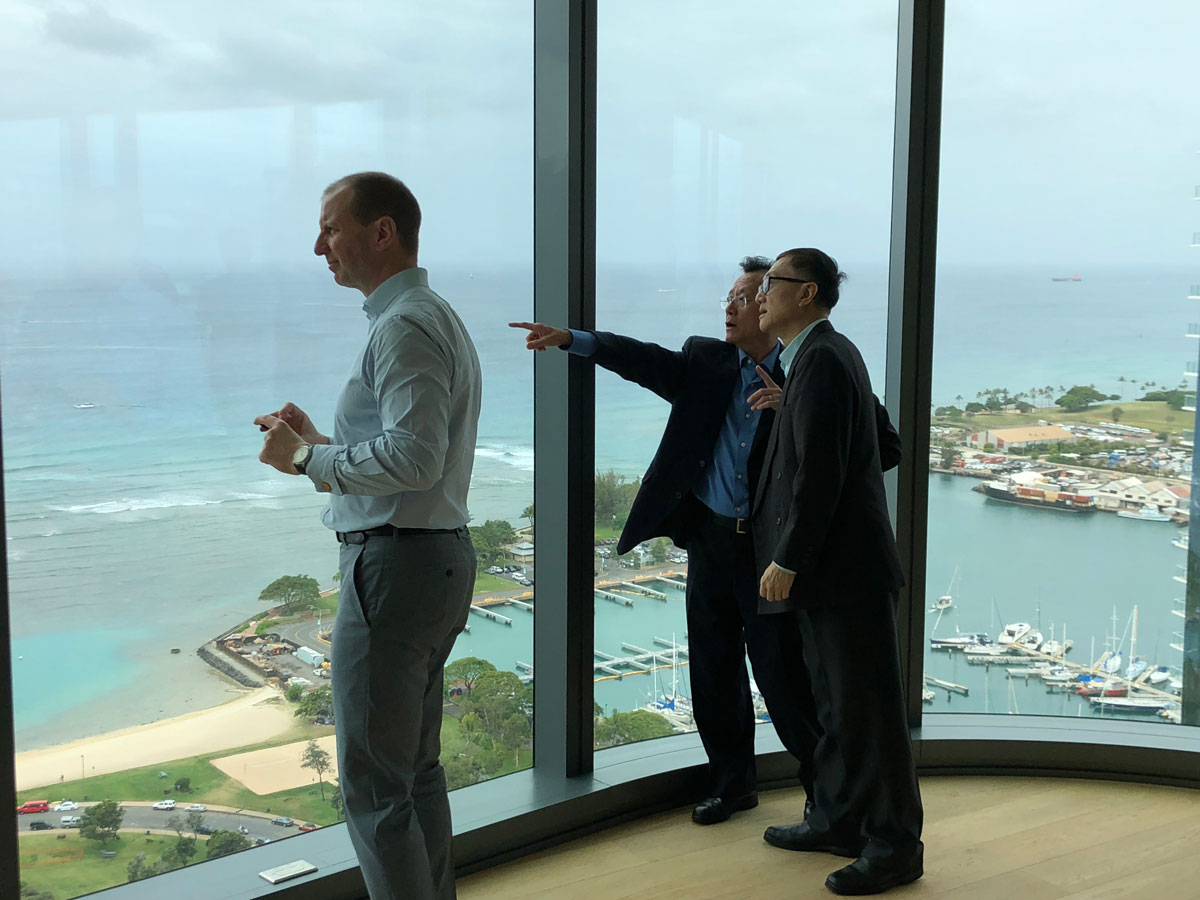 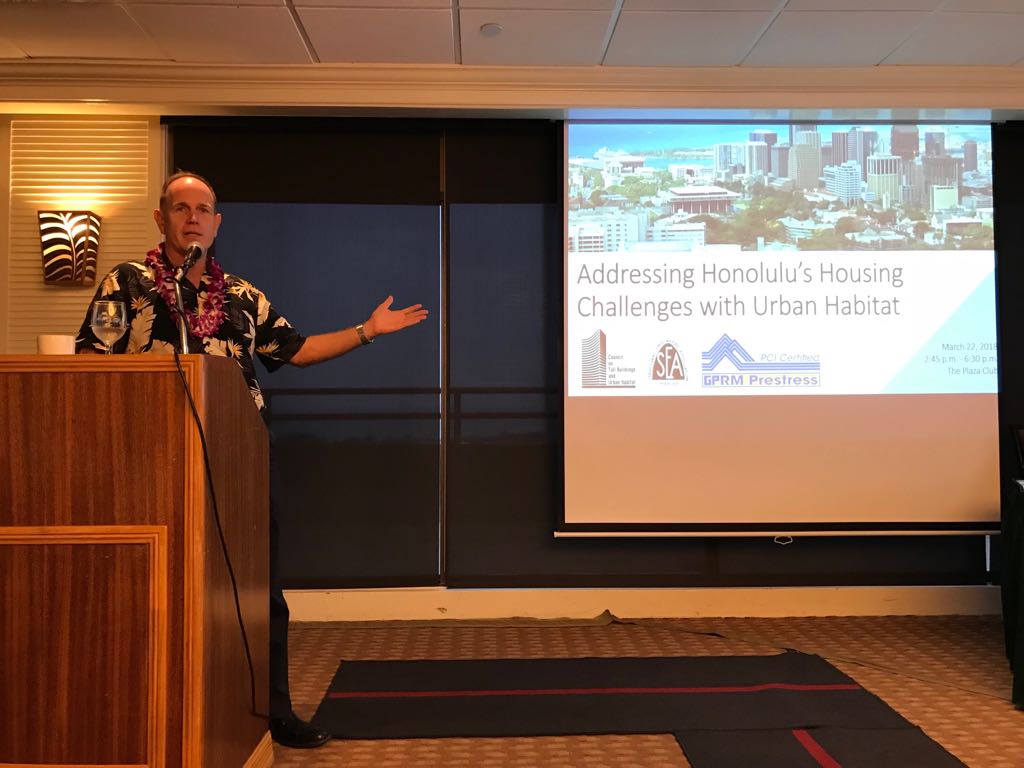 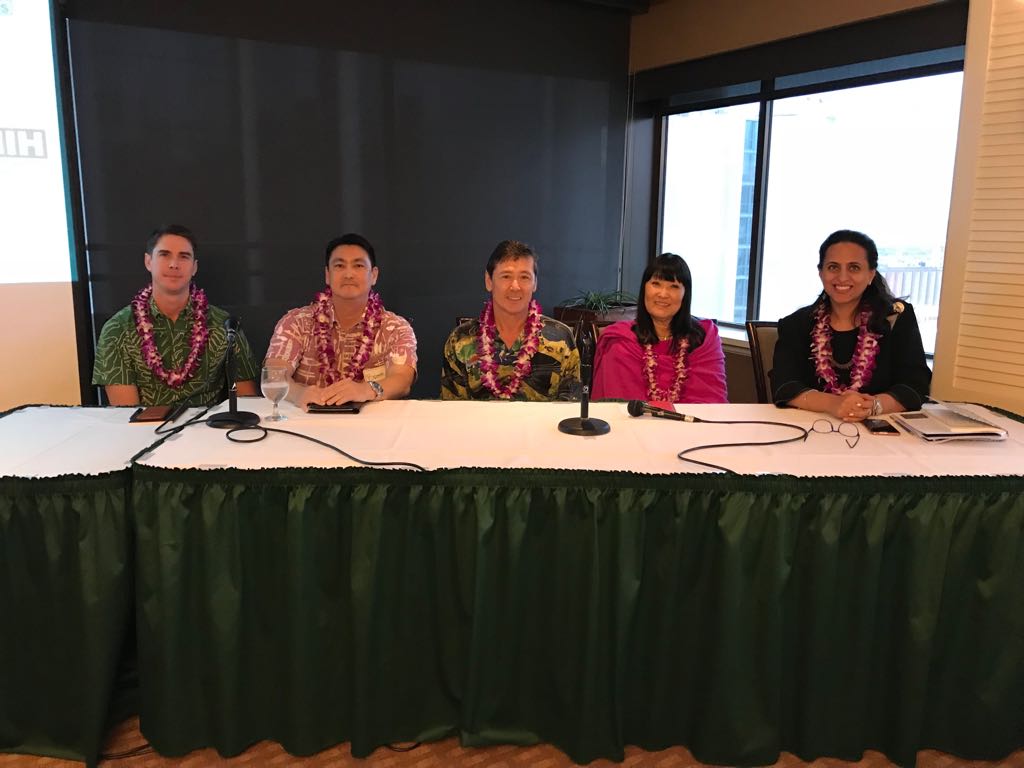